The eighth Wonder of the World perhaps?

For the price of a night at my last stop, I could have stayed for four or five nights at my next one. And, oh, how I wish I had!

While I had an inkling of what I would find there, I was unprepared to be totally and utterly blown away by what must surely be one of the most spectacular sights anywhere in India.

A scary 2½ hour drive from Gajner, mostly on a fast, two-lane highway, brought me to the Kurja Resort in an arid desert location two miles (3.5kms) outside the town of Phalodi. I could happily have spent several days here, knowing what was omnipresent just a five-minute drive away.

Within half an hour of checking-in, I was doing that drive! I couldn’t wait to see if what I’d heard was true.

Khichan, a dusty village of small, mostly single-storey square, flat-roofed buildings, is home to some 1200 families totalling around 7000 people. Many are of the Marwari Jain faith, a religion that believes animals and plants, as well as human beings, contain living souls and that they should be treated equally, with respect and compassion.

About 50 years ago, one Ratan Lal Maloo, a Jain native of Khichan who had been working away from home, returned to the village and, without work, was given the job of putting down grain to feed pigeons and occasional peacocks. A dozen Demoiselle Cranes (called kurja in Rajasthani), previously seen visiting neighbouring farmland, soon arrived too. Later, they were joined by a few more and, in subsequent winters, the number of visiting cranes swelled to sizeable flocks. A charitable body was set up by a concerned villager, a man named Ganga Ram, to fund the feeding supported by donations from local and international visitors. Because local dogs had started hunting them, the village council was asked to provide land on the outskirts of the village for the building of a chugga ghar, a ‘bird-feeding home’ protected by a wall and with a place to store grain. Several Jain traders supported the initiative with supplies of grain.

By the turn of the century, visiting cranes were there in their thousands, numbers beginning slowly as early as August each year, peaking during the winter months, and declining as late as March of the following year. Today, although no-one knows the precise numbers, an estimated 20,000 or more cranes come to Khichan each year.

Demoiselle Canes are the smallest of the world’s crane species, weighing about 4 to 7lbs (2 to 3 kg), standing 3ft (90 cm) tall, and with a wing span of 5 to 6 feet (155 –180 cm). They are the second most abundant cranes, breeding in the Eurasian and Mongolian plains and steppes. Their migration to warmer winter climes is long and arduous, crossing high terrain and the Himalayas they often fly at heights of between 16,000 and 26,000 ft (around 5000 to 8000m).

Their plain bluish-grey plumage also makes them one of the prettiest of the crane family and to see them in such vast numbers is a fabulous sight.

This first afternoon, I found them resting beside one of several ponds amid sand dunes to the north of the village. Apart from a couple of local children, I was the only human being there. Apart from a family of Pintail ducks and a lone Red-wattled Lapwing, the only birds were Demoiselle Cranes.

I was astounded by the sheer volume of them, flying overhead and standing just feet away from me. Sudden movement sent them marching away in unison or fleetingly rising into the air. I sat and watched them fascinated for over an hour, before returning to my room at the resort named after these fantastic birds. 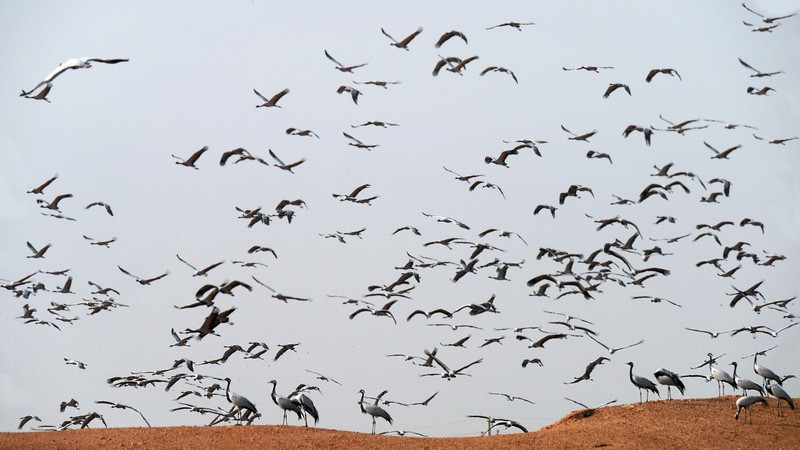 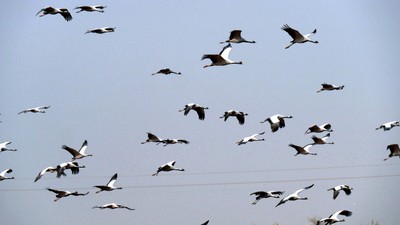 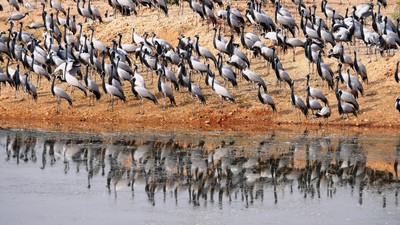 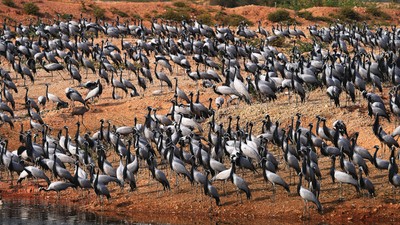 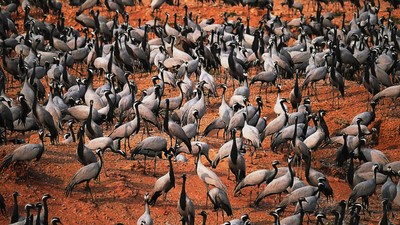 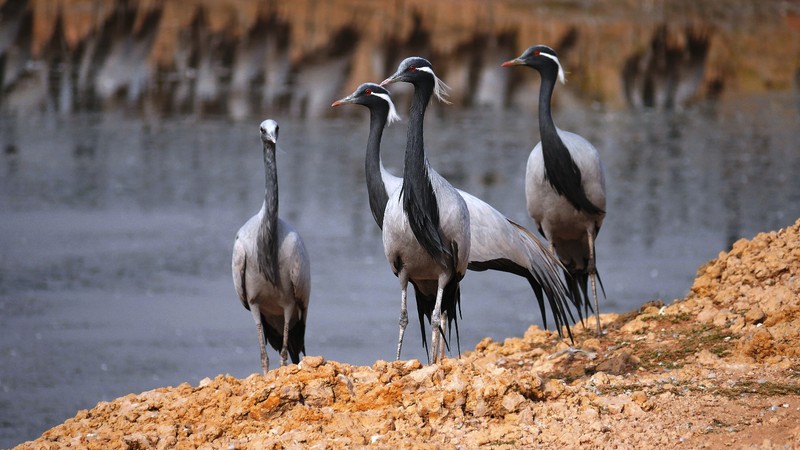 Next morning at dawn, I was back – this time joining two families, one Indian and one South African, on the roof of someone’s house opposite the chugga garh. They were all just as stunned to witness the spectacle unfolding before us.

As the sun’s orange glow filled the sky, vast flocks of birds flew in from their night-time roosts, wave after wave whirling high above, then dropping ever lower towards us. Huge flocks of pigeons joined them, these braver birds the first to descend in their hundreds to the feeding ground in the compound below us.

At first, the cranes were reluctant to land, gliding in lines over our heads, then sailing away before repeating the circuit time after time. 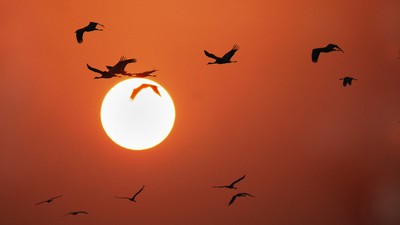 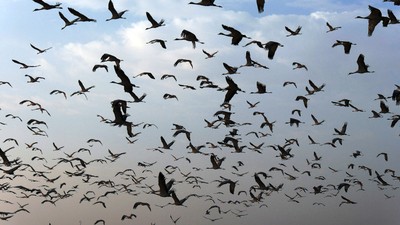 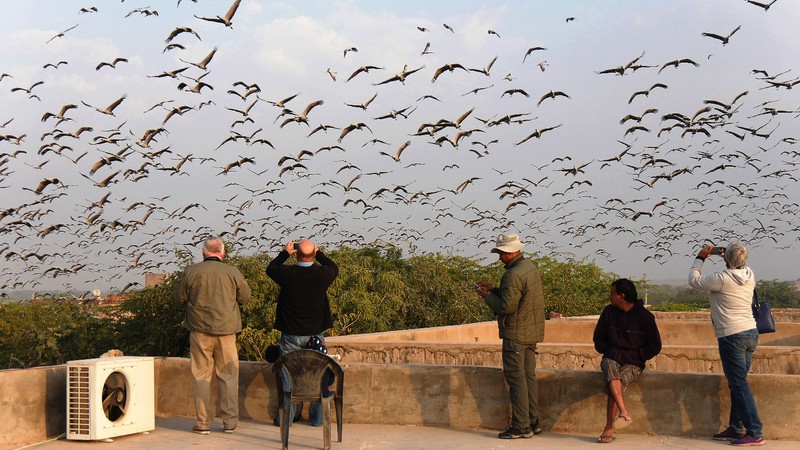 Eventually, one courageous crane descended and started to feed on the seed that had been laid down in lines on the ground. Judging the coast clear, more rapidly joined it. Then came more and more and more, gliding down in small groups amid much squawking and flapping until the entire compound was a sea of feathers, grey, white and black. All the time, more waves of these gracious birds flew overhead, some landing on higher ground to the side of the feeding areas to await their turn. 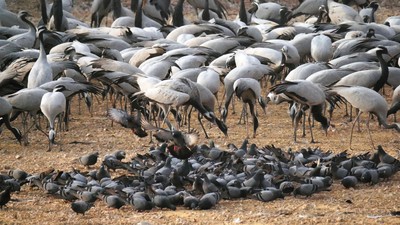 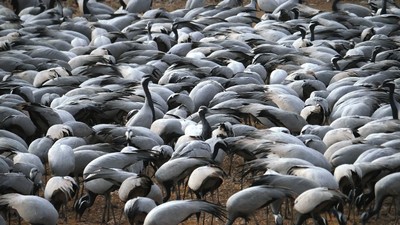 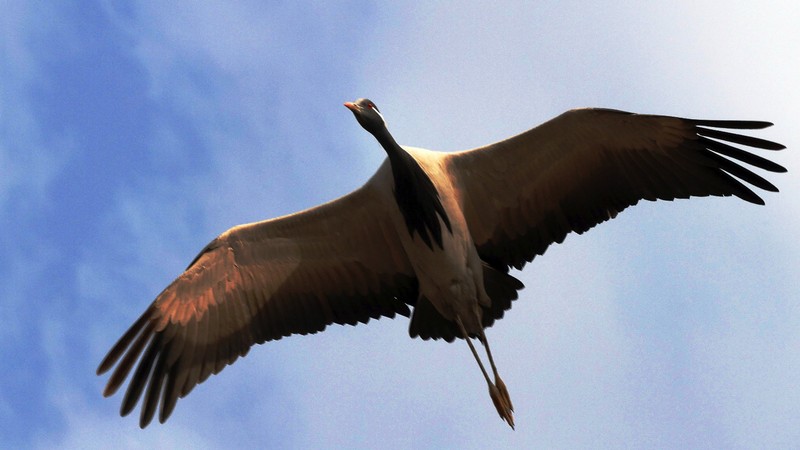 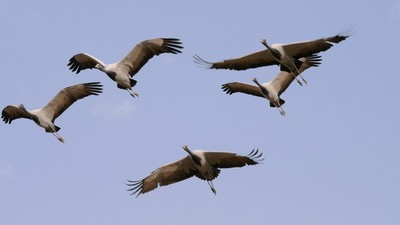 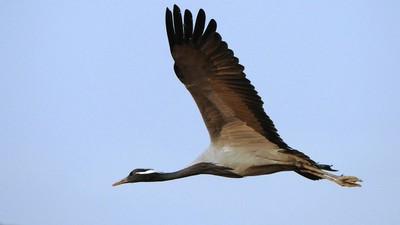 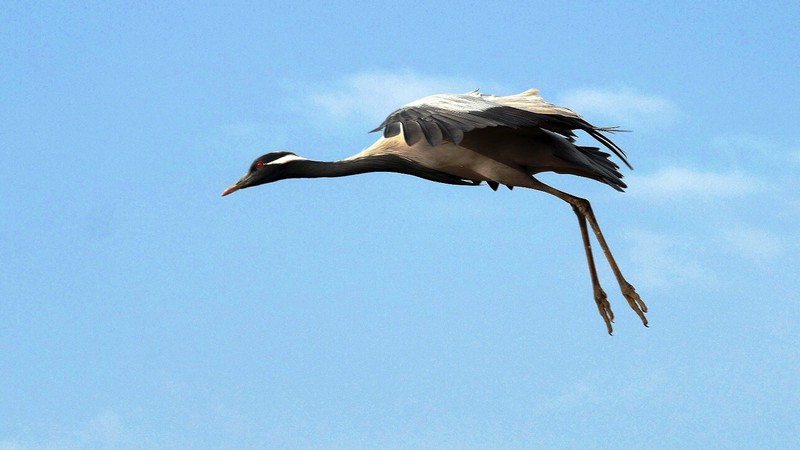 The birds below us were, at one moment, a sea of rounded feathers, heads down, feeding voraciously. Next, startled by something unseen, they were heads up, marching forward like a well-trained grey army. 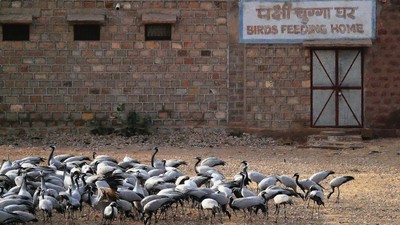 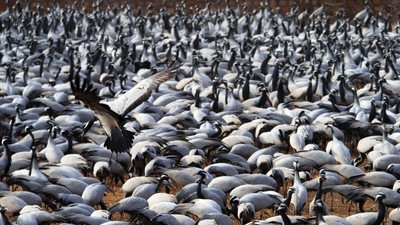 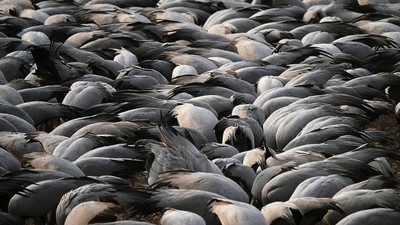 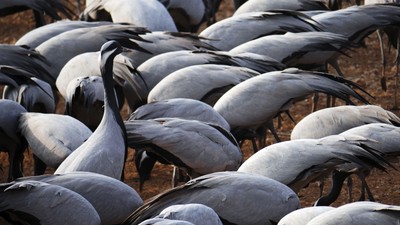 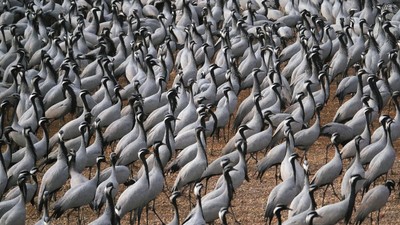 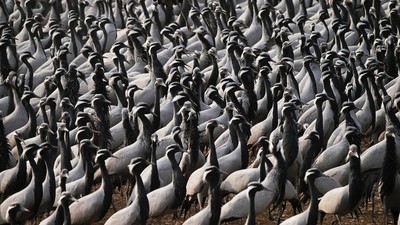 Finally, satiated, they rose as if on a signal, flying off into the clear blue sky, to be replaced by the next wave that had been waiting so patiently and noisily nearby. These, in turn, were replaced by those on wing. Still more flew in from the sands beyond, acrobatically filling the sky above our heads then swooping down to fill spaces vacated by the previous wave.

This would continue for several hours until all the birds had taken their fill and retreated to the ponds outside the village to bathe and drink. I was in need of the same, so returned to my hotel for a shower and breakfast before continuing my journey westward to Jaisalmer.

My too-brief visit to Khichan was an amazing experience. I'd go so far as to say that it’s one that ranks close to my first sight of that most enigmatic monument, the Taj Mahal.

The ‘resort’, made up of a mix of accommodation in brick-built blocks and, later in the year, fully-equipped tents on a permanent base, is set in substantial grounds of lawns fringed by flowering hibiscus shrubs. There’s a pleasant restaurant and, at night, a convivial fire-pit provides a setting for pre-dinner drinks and chats. 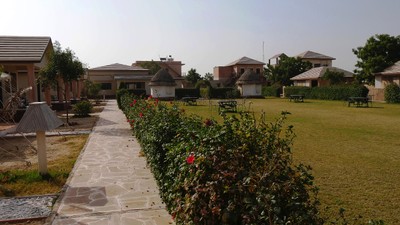 It’s been open for less than a year and they have yet to get their priorities sorted. The promised mini-bar in the room was empty, for example, the bathrobe and slippers missing, and the ‘views’ obscured by dark-green anti-mosquito netting at the windows. However, these deficiencies were more than compensated for by the size of the room, the good lighting, the sitting area, ample wardrobe space and efficient bathroom.

I booked through Booking.com, but could have done it direct, possibly at a slightly higher rate, through their own website (www.kurjaresort.com/). The description of facilities on Booking.com is inaccurate - bathrobes, slippers, etc., are not provided, as mentioned above, and WiFi is not available in the rooms. Nonetheless, it's still a friendly, efficient and very comfortable place to stay. Food is good and reasonably priced too.

Cost: Double cottage-style room for single occupancy cost Rs. 3240 (around £33) per night for bed and breakfast. An ample dinner of Butter Chicken, Jeera Rice, a roti and a bottle of beer was Rs.560 (£6ish).

Previous Next Table of contents

I loved our brief stop in Khichan - an amazing place as you say. But I would have loved even more to be able to stay overnight and visit at dawn as you did!

Comments on this blog entry are now closed to non-Travellerspoint members. You can still leave a comment if you are a member of Travellerspoint.

If you aren't a member of Travellerspoint yet, you can join for free.